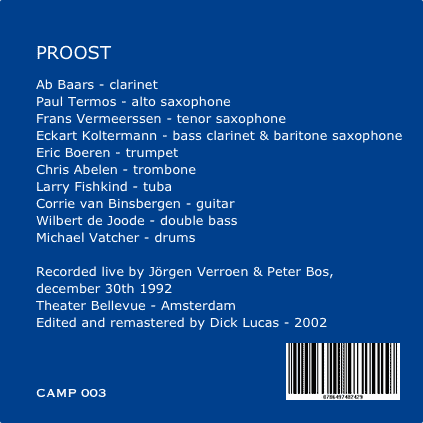 GROOVEMASTERJanuary 2005 PROOSTImagine the Art Ensemble Of Chicago jamming with Duke Ellington and the Willem Breuker Collective, injecting their jam with elements from the New Orleans funk, blues and brass band music, and you’ll get a pretty good picture of what this CD by this Dutch trombone player sounds like.On this CD he is accompanied by some great musicians like Eric Boeren on trumpet, Larry Fishkind on the tuba and Corrie van Binsbergen on guitar.The result is a very tight free jazz big band in which all members have all freedom to perform their solos over the on-going basic melodies.The songs all come from live recordings from 1992, during the Klap Of The Vuurpijl festival but they don’t sound dated at all.“Modder” sounds like a weird New Orleans street parade band. The song has a stumbling rhythm in which the stubborn horns have all freedom. Plenty of soulful sax solos here. The song keeps its lazy New Orleans funk feel, despite the stubborn character of the song.“Bus” is a speedy brass band track with plenty of squeaking and battling horns.“Proost” sounds like a drunk big band, swaying all over the place. Plenty of screaming sax solos over a bopping backing.“Sem” has some staccato clockwork rhythms and a biting funky guitar solo.The songs goes from festive to very atmospheric.“Bob In China” is a Chinese free jazz melody with some beautiful horns.This CD offers the creme de la creme of Dutch adventurous free jazz.

Jazz WeeklyThere’s something — and hope it isn’t economics — which finds so many outstanding performances by improvisers from the Netherlands, organized around “little” big bands. Sure, smaller and larger combinations turn out memorable work, but when exceptional Dutch improv first comes to mind so do Misha Mengelberg’s ICP Orchestra, Willem Breuker Kollektief’s and, more recently Michael Braam’s Bik Bent Braam and the ensembles led by Martin Fondse.Since so many of these bands are the vision of one person, writing and arranging for 10 to 12 players allows room for Holland’s idiosyncratic soloists, with just enough musical heft on tap to move the sessions past blowing sessions or free-for-all improvisations.We know of these particular groups because most of them have existed in one form or another for many years, yet other players have dabbled in that formula as well. Proost is the result of that dabbling; a record of a one-off, 10-piece group put together on the second last day of 1992 by trombonist Chris Abelen. Abelen, who has since made his reputation with a quintet, has sat on tapes of this, in-retrospect, all-star session fore more than a decade. The lukewarm audience reception at the time made him undervalue the performance.Indeed, it does have its weaknesses. But since his newfound faith in the program that spurred its release means that the trombonist will probably never organize a group like it again, it’s tantalizing to hear how a set of first-class players interprets the eight tunes. Written for Breuker’s year-end Klap op de Vuurpijl festival, the tentet members include big (modern) band veterans like Abelen, as well as types whose first allegiance is to repertory jazz, Klezmer, fusion or free music.“Bus,” for instance, has the sort of jaunty, semi-classical lilt that you would expect from the ICP or maybe Globe Unity, complete with slowly syncopating ticking clock rhythms from drummer Michael Vatcher, a long-time associate of ICP reedist Michael Moore. Yet it’s another ICP stalwart, clarinetist Ab Baars, who is featured here. Working in a quiet neo-bop mode, he echoes 1950s New York mainstay Tony Scott. Until some split reed dissonance and intentional squeaks are introduced, Baars sticks to the coloratura range, as his bent notes are framed by a horn choir.These 1950s echoes seem genuine, for Abelen’s writing on the title track sounds like it could have come from some of the advanced composer/arrangers of that time like Teddy Charles, Gil Evans or George Russell. Here, though, the alto line which seems to slide between acrid no-compromise swing and honeyed movement, isn’t played by Phil Woods or Gigi Gryce, but Paul Termos, who has experience in bands led by Mengelberg and bassist Maarten Altena. He starts with sharp freebop trills that morph into overblowing and shrill claxon calls. Bomb dropping and cymbal pinging, Vatcher stays with him every step of the way, but referencing the same era. So does the straightforward foursquare work of Wibert de Joode, one of the country’s most accomplished bass masters. The bassist whose experience encompasses bands led by Abelen, Baars, Braam as well Yank avant-gardists like saxophonist Charles Gayle links the rhythm of the 1950s with the virtuosity of the 1990s.Not to be outdone, fusion rears its head on frisky “Sem,” in the person of guitarist Corrie van Binsbergen. Someone who since the mid 1980s has worked in pop contexts as well as doing jazz gigs with Abelen, she starts off playing near acoustically, eventually rocking out, adopting stout Johnson Brothers-style guitar licks to the attendant music. Other horns provide the backing riffs, but her chief spur in all this is the tuba of Larry Fishkind, usually found in klezmer settings.That same back-to-the-future mixture also sets up “Mis,” the CD’s longest track as well as Abelen’s feature for himself. Here though, while Fishkind’s sepulchral tuba line rumbles through the brass basement, the trombonist’s 1930s-style plunger showcase takes place among rim shots from the drummer and countermotifs from the reeds. Ending open-horned as he ascends the scale and references a ‘bone sound a few decades more contemporary, the backing he has written for himself reflects sophisticated progressivism.Proost isn’t without its faults however. “Bob in China” (sic), the final piece is rife with faux Orientalisms, including a gong sounded at the top and in the coda bookending a theme that is more vaudeville Chinese than a legitimate Sino-sound. Furthermore, a few too many of the other pieces appear to merely end with the soloist or band suddenly stopping, as if ideas had been exhausted, instead of those concepts being followed to a logicalconclusion.Still, even if the CD isn’t at the highest rank it will appeal to those who can’t get enough of mid-sized EuroImprov bands and those interested in hearing trombonist Abelen in a different context.Track Listing: 1. Modder; 2. Bus; 3. Mis; 4. Scale; 5. MF-2Hd; 6. Proost; 7. Sem; 8. Bob in ChinaKen Waxman