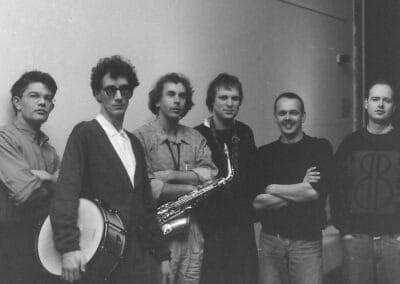 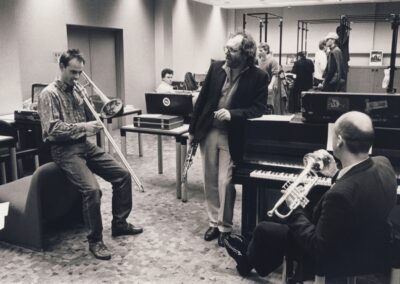 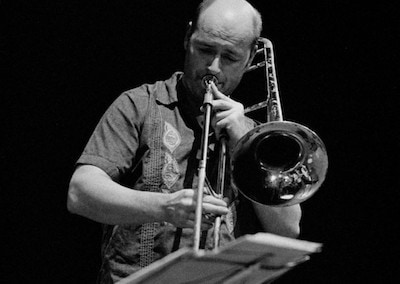 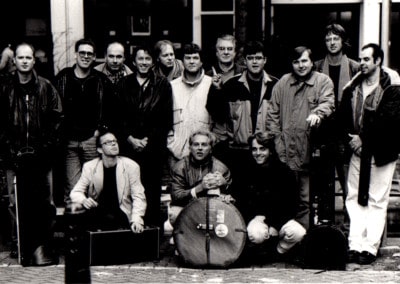 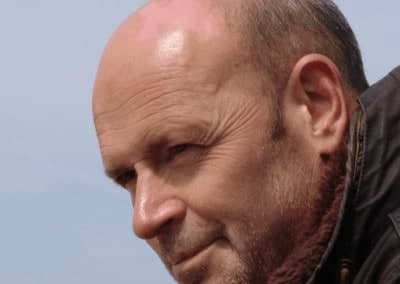 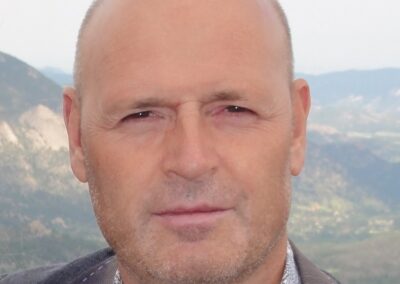 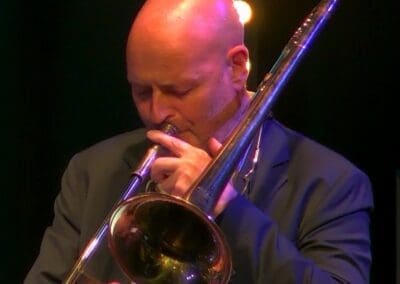 BiographyDutch trombonist Chris Abelen (Tilburg, the Netherlands 29 september 1959) started out on trumpet at 11, switching to the bigger horn at 18. He studied classical trombone with Charles Toet and Henri Aarts, and then jazz and improvised music with Willem van Manen, founding member of and first trombonist with the Willem Breuker Kollektief, the band that first called global attention to Dutch improvised music. In 1984, Abelen took over van Manen’s old chair in the Kollektief from short-timer Garrett List, and would tour and record extensively with that band till 1988. But Abelen had the urge to lead his own groups. At Willem Breuker’s annual Klap op de Vuurpijl festival in 1992, he led a pan-generational, pan-stylistic international tentet (including Ab Baars and Paul Termos in the reeds, tubist Larry Fishkind and Michael Vatcher on drums), showcasing the players with mini-concertos that demonstrate Abelen’s preoccupations with color, texture and mood, as well as his wry indirect sense of humor. The proof’s on the CD Proost (BVHaast).But that was a one-shot ensemble. Abelen wanted a band. His first post-WBK working group had been a sextet including tenor saxophonist Tobias Delius and bassist Wilbert de Joode, which debuted on an earlier Klap op de Vuurpijl festival (1989). That evolved into a quartet with drummer Martin van Duynhoven—you can hear that lineup on the live title track to Abelen’s 2011 digital sampler Plint—later replaced by Charles Huffstadt. With the Proost tentet’s Corrie van Binsbergen added on electric guitar, this group became the leader’s signature outfit, the Chris Abelen Quintet, another band of distinct individual voices. The pieces could be highly melodic and/or densely busy, and the spontaneous arrangements were fluid, with no fixed solo routines. The composer/leader functioned as traffic cop on trombone: setting the tempos, calling back the melodies. A few pieces from the Quintet’s 1996 debut Dance of the Penguins return on 1999’s What a Romance, to make plain that fluidity and instant arranging. The 2004 follow-up Space was for another tentet: the Quintet plus Ab Baars on clarinet and the Zapp String Quartet. Over the years Chris Abelen has also toured and recorded with numerous Dutch jazz and new music ensembles, including Willem van Manen’s Contraband, I Compani, Paradise Regained Orchestra, Eric van der Westen Octet, Dick de Graaf Septet, and J.C. Tans + Rockets. After leaving the Willem Breuker Kollektief, he assisted Breuker in preparing parts for performance and scores for publication. As an outgrowth of that work, Chris now works as a professional engraver, serving publishers such as Boosey & Hawkes (London), Donemus and Universal; orchestras including the Los Angeles Philharmonic, Royal Concertgebouw Orchestra, Asko/Schönberg Ensemble and Metropole Orchestra; and other composers including Louis Andriessen, Martijn Padding, Willem Jeths, Geert van Keulen, Elmer Schönberger and Bernard van Beurden.In the 2010s, Abelen took his music in a new direction. In 2016 he released his sixth album, A day at the office, for a septet with a new line-up, and a slightly more pop and even funk orientation, despite the instrumentation: trumpeter Angelo Verploegen, Floris van der Vlugt and Tini Thomsen on high and low reeds, and a new guitar/bass/drums rhythm section: Thijs Huijbens, Ulrich Wentzlaff-Eggebert and Yonga Sun. This album is part of a new project in which Abelen collaborates with lyricist/librettist Bastiaan Geleijnse, one of the cartoonists behind the acclaimed Dutch newspaper comic Fokke en Sukke. In 2018 came the sequel Songs on the eve of dismissal, with vocals by Lorena del Mar (Abelen’s first record with a singer). The Chris Abelen 7’s Live at the BIM (2020) is drawn from a June 2019 concert at Amsterdam’s Bimhuis, featuring songs from the latter album; performances from that concert are posted on YouTube and Vimeo.Other new albums were in the pipeline when the global pandemic hit in 2020: The joy of an empty trash can for a new quintet, The audience is growing for solo trombone, and a final version of the project Bye Bye Bloomingdale, previewed on a trombone-and-samples singles released in 2018.

All recordings (as a leader and with others)

InterviewsAll About Jazz Q & AInstrument(s): Trombone, piano. Teachers and/or influences? I had a lot of teachers from my childhood but I would like to mention Charles Toet, a baroque trombonist and my 1st trombone teacher at the Academy of Music (I started with classical trombone), and Willem van Manen, with whom I studied jazz and improvisation in Amsterdam. About the influences, on trombone Dick Shearer, when talking about sound and J.J. Johnson(clarity). I hardly listen to other trombone players but Miles Davis, John Coltrane, Duke Ellington, Stan Kenton and Keith Jarrett are my main influences in jazz. Your sound and approach to music As mentioned before, Dick Shearer for the sound. And the approach to music, I learned from Willem Breuker when I played in his band to listen to other music than jazz. So I started listening to Mozart, and later on expanded this to all the great classical composers. But my favorites are still Mozart for his Da Ponte operas, Beethoven and Schubert for their string quartets and piano sonatas, and Stravinsky for The Rake’s Progress. Your teaching approach I don’t teach, but when someone asks me advice on how to improvise I tell them to take long breaks between their phrases. This gives more room to the music, otherwise you will be listening to a kind of 8th note exercise instead of a solo with a story or idea. Road story: Your best or worst experience Once I had a concert with my quintet and during this concert there was a lady who was talking the entire time. Very disturbing, so I asked her after the concert why she didn’t stop while we were playing. She said ‘O, I supposed this was allowed because it is a jazz concert.’ I asked her if she didn’t notice she was the only one. But she had no idea what I was talking about, so I gave her my CD of the band to listen at home so she could hear what she missed. Your favorite recording in your discography and why? Space, with my quintet, Ab Baars on clarinet and the Zapp String Quartet. The first jazz album I bought was: I can’t remember, must be something with a big band, I think from Stan Kenton, Live at Redlands University. The Kenton albums were hard to get in those days, but one day I was shopping in another town and in a department store like Harrods they had to my surprise a few Creative World Kenton albums. But I didn’t have any money with me, so I took the train home, and hoped they would still be there when I returned. Fortunately for me most people didn’t know Kenton in the Netherlands so I went home as the proud owner of some very rare Stan Kenton albums (among them the Graettinger’s City of Glass and Adventures in Standards with the mellophones). How would you describe the state of jazz today? A fine state, but it could use some more listeners and performers. What are some of the essential requirements to keep jazz alive and growing? Education, the risk nowadays is with everybody listening within their own bubble, young children don’t hear any (jazz) music outside it anymore. The same goes for classical music. What is in the near future? At this moment I am working on a new project, Songs on the eve of dismissal, with a friend of mine, Bastiaan Geleijnse who wrote the lyrics. We first wanted to write an opera, but this project it more manageable to start with. It’s about working in an office, with the fear of being dismissed, instead of the usual love song themes. For this project I released two albums, the Songs album and A day at the office, the instrumental part of the project (Lorena del Mar sings the Songs titles). We are organising a tour for this project in western Europe. What is your greatest fear when you perform? It is not really a fear but more an inconvenience, dry lips which limits my range. So don’t eat a pasta with Parmesan cheese before a concert. What song would you like played at your funeral? “Walk Softly” by theStan Kenton Orchestra, from the album Live at the London Hilton Hotel. And my relatives should play “Shout” from The Trammps and “California Soul” from Marlena Shaw during the afterparty. What is your favorite song to whistle or sing in the shower? I usually whistle the song I last heard or played. If I weren’t a jazz musician, I would be a: 1st violin player in a string quartet.