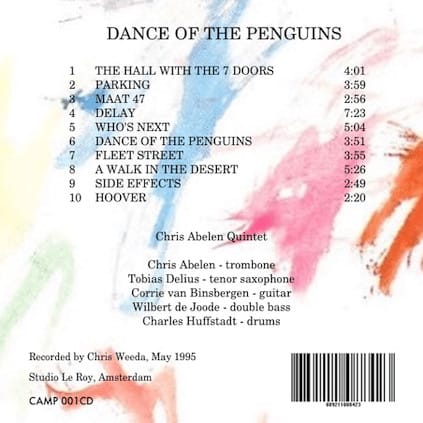 Liner notes by Kevin Whitehead“This quintet is the best band for me,” Chris Abelen says, “because we all have something we can’t play.” Huh? “People say I talk negative, but what’s left is positive.” Like in sculpture – the art of taking away the extraneous? “Yes. What remains is the best.” The music makes the case.Check out those track timings, more like 1960 doowop singles than jazz jams. The cd era has seen too many flabby but undernourished albums, stretching meager material over 70 minutes. Penguins is lean as rabbit, and as chewy, and for the same reason:hyperactivity. “I like pieces to be short, the two or three motives as clear as possible  so you can always hear if the theme is present in the improvisations or not. If it’s not, that could speak to the quality of the improvising, or the clarity of the material.” It’s the old jazz steeplechase with updated rules: prove yourself improvising on this material, interacting with these players.Delius and De Joode work together a lot in several outwardbound Amsterdam bands – Eric Boeren’s, interpreting Ornette Coleman; Joost Buis’s, reviving Sun Ra; playing original music in Chris Abelen’s, in several incarnations. Corrie van Binsbergen and Charles Huffstadt come from different circles. She’s a rhythm music guitar wiz who uses an arsenal of techniques to express her musical personality not obscure it. He’s a psychiatrist by trade, takes same approach to drumming: a careful listener who lets the other person speak first. He came up in the Groningen free-funk scene with vocal acrobat Greetje Bijma, plays now with Willem van Manen’s Contraband, where bandmate Abelen took a shine to his reactive playing.The rhythm section hadn’t played together before rehearsals for this session. Way the leader talks, he wanted to disorient them bit.(that’s Dutch: the Mengelberg Method.)” Wilbert expected the drummer to play four on the cymbal, and Charles expected walking bass” –each thought the other should keep time. Crisis? Hear them dance around each other on maat 47, or under trombone on the title track: they revolve around unstated pulse, tug against the pull of that negative space.“ Corrie said she didn’t always know that to play on a piece. I said, ‘you don’t have to play on every bar.’ She has her own band fort hat. BOINK! And then 20 seconds of nothing. Great.” Track her through the infectious maat 47, a lesson in lessening: weaned on space crammer Zappa she takes a cue from quietist Monk. She pulls back without  sounding tentative; hear her comping behind Toby’s tenor, first solo first track, her popping notes matching his. (You hear Afro pop in there? Think she wasn’t listening when she was in Ouagadougou a few months before?)What can’t Delius do? Play normal: respect bar lines, stick to phrases of predictable length, parse chords in obvious ways. He’s  subtle, timbrally as well as rhythmically, manipulating the tenor’s overtones from one note to next. Who knew that would work with brash electric guitar? Abelen, and now us. Their solos round each other off, complementary. “Except  for Toby on Delay and trombone and drums on Who’s Next, there were no fixed solo routines. Different people improvise in different takes, and the tempos would change so much, it was impossible to make cuts from one take to another, which I don’t mind at all. Let the pieces take their own course, and let’s see what happens.”One reason cuts are short: players take short cuts. Horns improvise independent lines simultaneuosly on side effects, the bassist takes his ‘solo’ during the closing theme of The hall with the 7 doors. Abelen:” Wilbert’s idea, I didn’t direct him at all.One inspiration for Who’s next was early pieces by Prince, where the drums play in tempo and there’s  an open bass line; I want the bass to function like another melody instrument.” Drums too, to my ears. On Who’s Next, Huffstadt’s rhythmic tattoo functions as the melody, the trombone part as its counterline.  Hear it that way, and drums play the shortest possible theme restatement, at the end of Huffstadt’s solo, under which horns appropriate the drums’ original telegraphic line. (Shall we relate all the compactness and negative space to the players hailing from small below-sealevel Holland?)Pithy motives do get focused response.(And some are amazingly pithy; Delay is largely structured around one sustained mote, picked up by whomever.) Delius audibly worries the melodic material; on DANCE OF THE PENGUINS van Binsbergen in her solo plays with and against the theme’s wide intervals and staccato phrases. One concession to convention:Abelen assigns himself the melody on most pieces. As he points out, trombonists always do that when they start their own band, rarely having the chance elsewhere. “But it’s also because there’s no better way for a leader and composer to direct the band: setting the tempo and number  of repeats, whether to play a theme between solos, things like that.”Fond as the composer is of staccato heads as a means to gently shape solos, Abelen the trombonist has some of the easy swagger of his early hero Roswell Rudd, coupled with his own ripe dark tone. “Should I quit?” one of his side folk asked when the recording was over. “ No, we’re just starting.” Brought up short by Abelen’s brevity? Play it again.

DownbeatOn his debut as a frontman, Dutch trombonist Abelen’s terse, potent compositions serve as seed bed for his band’s economical improvisations, and his deft players cultivate some very special flora, indeed.Most exciting is tenor saxist Tobias Delius, who’s been on the scene awhile but doesn’t care much about recording. He’s got a Ben Webster/Archie Shepp sound: big, breathy, supple, able to toy most delightfully with time.Delius is featured over pedal tones on “Delay,” just before Corrie van Binsbergen breaks out with a nasty electric guitar solo. Charles Huffstadt’s march drums on “Who’s Next” recall Henry Threadgill’s Sextet, but this group’s got a wholly original sound. The leader’s a fine melodist, as well, and bassist Wilbert de Joode wields an enviable high-action, matte-timbre sound.John Corbett

JazzpodiumIt is only since Willem Breuker that jazz from the Netherlands can be regarded as innovative or groundbreaking. The trombonist Chris Abelen, from the land of tulips, tolerance and tomatoes, has produced an album, Dance of the Penguins, that definitely falls under that heading. His music is by no means revolutionary, but the ten pieces the quintet recorded here do not simply tread the well worn paths of jazz.Instead of a piano the group employs an often biting electric guitar, which joins the trombone, tenor saxophone, bass and drums. Most of the numbers last no longer than four minutes, but that was the idea: Abelen wanted the material to remain prominent during improvisations (he says in the liner notes) and that can only work if the numbers do not last too long. The thematic material turns out comical, not to mention off the wall. The band grabs every opportunity for freedom in the short solos. Spontaneity and the joy of experimenting are foremost in these short escapades, and thus Dance of the Penguins supports the positive stereotype that in Dutch jazz everything goes, without it ever becoming dull.Ulrich Dorges

All Music GuideTrombonist and bandleader Chris Abelen assembled a strange crew for Dance of the Penguins; none of the musicians are his regular bandmates, but that’s half the fun of the record. Beginning with Dutch uberguitarist Corrie van Binsbergen, and including avant wild men, bassist Wilbert de Joode and tenor saxophonist Tobias Delius, as well as understated amateur — but fully competent and original — drummer Charles Huffstadt (he’s a psychiatrist by trade) and you have an ensemble who is all about the tight, brief, and riveting compositions of Abelen.Nothing here is over seven and a half minutes, and that’s only one piece. Most of the works here range from just over two minutes to under four with only a pair of exceptions. The tight, rhythm-heavy jazz of Abelen is full of gorgeous lyrical ideas and harmonic principles that are generous to the entire ensemble. The length of his compositions put the heat on a soloist to make every note count — and they do. “Matt 47” with van Binsbergen’s understated yet distorted guitar comping is remarkable for how much she gets done against the saxophone and the trombone (a la Monk), and the way de Joode and Huffstadt dance around each other in negative space, neither one straying from or keeping time. “Who’s Next” is a lightning rod for van Binsbergen; her spare, elegant choice of notes is nonetheless a popping electrical feast of choice arpeggio, and Delius’ off-kilter note-for-note harmonic development challenges Abelen in all the right intervals. Given that the piece is a bit over five minutes, that’s an eternity for this band. The closer, “Hoover,” must be named for the vacuum cleaner as the ensemble playing two harmonic lines in three different pitches plays as if they were sucking all the music up from the earth. Note as the tune reaches its climax, Abelen’s punch-drunk solo giving in to van Binsbergen’s screaming guitar line that carries it out; it leaves the listener breathless, and, at under 40 minutes, clamoring for more.Thom Jurek, All Music GuideMSN Music Entertainment, All Music Guide 2005Dance of the PenguinsChris Abelen

Penguin Guide to JazzAbelen is a great believer in less-is-more: this is a refreshingly short CD, leaving one wanting more, and the band seem reluctant to play as a group, one or other musician always dropping out to listen to the others, the quirky little tunes laid skeletally bare by their delivery, the cranky rhythms and rising-falling dynamics constantly pulling the rug out from under.Abelen himself plays a patrician-type role, his horn making melodic statements and using his rather starchy delivery to deadpan the group’s more cartoonish moments. Delius, who can play in any style, is the singular voice, and the others play with a conspiratorial, behind-the-hand stealth. Hard to pin down but surprisingly engrossing.Penguin Guide to Jazz on CD – Fourth Edition – 1998Chris Abelen TROMBONE***(*) Dance of the Penguins BVHAAST 9608 . . . .